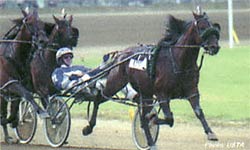 No Pan Intended driven by David Miller 2003 Pacing Triple Crown The name "Standardbred" distinguishes the harness horse from the Thoroughbred running horse and came from the breeding goal of developing horses that trotted or paced in a &standard& time. To be recognized as a Standardbred, a horse had to be capable of trotting or pacing a mile within the prescribed limits of a certain standard of time. This was known as &The Standard of Admission to Registration.& In 1897 that was 2:30 or better. In 1944 that time had been lowered to 2:20 or faster for two-year-olds and 2:15 or better for all other ages. Today, Standardbreds regularly trot and pace miles under two minutes.

A Standardbred's average size is 15 to 16 hands at the withers (1 hand = 4 inches), although some well-known trotters and pacers have been larger or smaller. Hambletonian was 15.1 hands; the great little pacing free-foraller and potent stallion Good Time was just 14 hands, while trotter Tagliabue, the 1995 Hambletonian Stake winner was 16.3 hands. 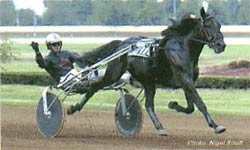 Windsong's Legacy driven by Trond Smedshammer 2004 Trotting Triple Crown Through selective breeding over the years, Standardbreds have become more refined in type and now more closely resemble the Thoroughbred than any other breed. The main difference is that the Standardbred is a heavier-boned horse with long, flat muscles. They are generally extremely durable and usually possess an even temperament. It is these attributes that have encouraged some Standardbreds to become fine road horses in the show-horse world; they are also successful as saddle horses for pleasure pursuits.

Standardbreds race at two distinct gaits, the trot and the pace, and there are different lines of sires and dams that produce the trotters and pacers. The trot is the more natural gait of the harness horse. Pacers do not stride as high as trotters and have more of a forward reach; due to the efficiency of their gait, they are generally three or four seconds faster than trotters over a one-mile distance.

There have also been instances of "double-gaited" horses. Some notables are Grattan Bars, Calumet Evelyn, Steamin' Demon, Six Day War and Countess Adios.

Many decades of selective breeding have resulted in more naturally-gaited trotters and pacers. This has increased their speed with each generation, as shown by the abundance of reduced world records each year. While the Thoroughbred appears to have reached its ultimate speed potential (1:32 over the course of one mile), the Standardbred continues to lower records and still has not reached the apex of its speed.

Historic Bloodlines
All modern-day Standardbreds can be traced back to the stallion Hambletonian 10 (1849-1876) who stood at stud in Chester, New York. Hambletonian is responsible for all the major sire lines leading to today's top trotters and pacers. The trotting branches flow through his sons Happy Medium and George Wilkes, while the pacing branches are through Happy Medium, Electioneer and Dictator. 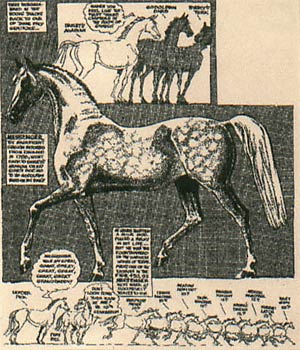 Hambletonian's sire line can be traced back to another very important horse, his great-grandsire Messenger. The importation of the grey English Thoroughbred stallion, Messenger, to America in 1788 was the turning point in establishing what is known as the American trotter, today's Standardbred breed. Messenger was a good racehorse in his native country and he continued as a sire of good Thoroughbred running horses in America. However, he also founded a separate and distinct breed of trotter which far surpassed all others in speed and quality. As his sons and daughters bred on, their progeny became widely known as superior performers, establishing Messenger as a truly historic stallion.

Messenger also appears in the ancestry of such great American Thoroughbred legends as American Eclipse, Whirlaway, Equipoise, Man O'War, and Sea Biscuit. Thus, Messenger is a foundation horse of both major racing breeds. Born in 1780, Messenger can be traced back six more generations to a horse foaled in 1704 known as the Darley Arabian. He was one of the three founding fathers of the Thoroughbred breed, the others being the 1689 foal Byerly Turk and the 1730 foal Godolphin Arabian. Most popular American breeds of horses can trace back to these three foundation sires. Descending from the Darley Arabian are Standardbreds, Thoroughbreds, Tennessee Walkers and English Hackneys. From the Byerly Turk come Thoroughbreds, American Saddle Horses and Morgan horses. The Godolphin Arabian is responsible for Thoroughbreds and many Quarter Horse families.